Deluxe T&T “Marches” on towards completion

We are now in March and the long “march” to the end of the dT&T Journey continues. So what have we completed since last update I hear you ask? Well here’s the latest news from the front… 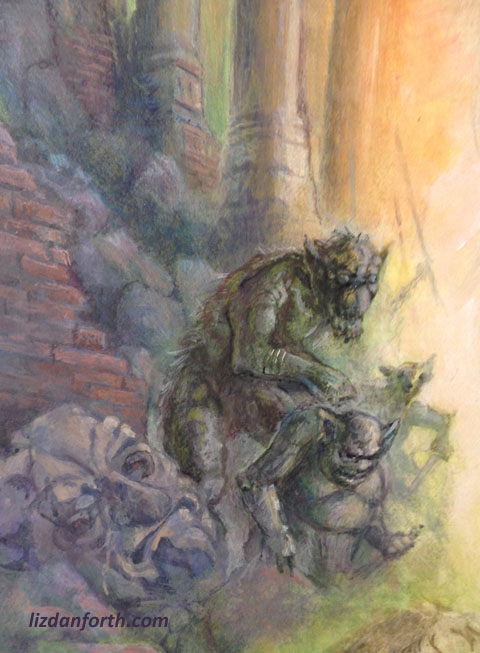 A close-up of a section of the Deluxe cover painting by Liz.

COVER:  Liz has spent most of her time this last month painting the cover art. It’s a big piece with a lot of characters, and she wants it to be her best T&T cover yet. And from what we’ve seen, she is well on her way to accomplishing all of those things. Below is a close-up of just one part of the cover painting, meant to give you a taste of what’s to come.

TEXT: We got all of the proofing corrections from five different proofers, each of whom is a specialist (either on T&T, grammar, game design or several of those.) Not only did we get the corrections, but all of them have been made to the rulebook. This is a very big step. All that’s left in that regard is for Liz and Ken to take one last look to see if there is anything they think still needs a final tweak or better explanation. We have continued to format and clean-up the graphics and page layouts as well, to make the book easier to use and nicer looking..

ART: I have gone through the book and eliminated cases where an illustration was used more than once. In laying out a 300+ page book, its pretty easy to use an illustration more than once. There are still a few places where an illo is used twice, mostly they are of creatures that we only have one illo of like the Dogtaur and the Rhynon (for example) Hopefully as the last few new illos come in they may solve a few more cases where there might be duplicates. Liz still has a few illos for the book yet to finish and she’s working on those whenever she needs a break from painting.

We also received some final art from Miika, who has created some 3D images of trolls to use in the color section. So those are now done. (Below is an example of one of her pieces)

MAPS: I have added the final version of Liz’s Knor map into the book, which included adding texturing, shading and other effects to the map – so all the maps are done. I also updated some of the other maps as there were cases where things were mentioned in the text, but were not on the map – those are all now fixed and I added those places to the various maps (Most of these were in Maneland, but there were a few in Zorr and Rrr’lff.

Textured and shaded version of the Knor map. (close-up)

INDEXING: Since last month, Ken St. Andre has gone through the entire rulebook and Trollworld section. He has created two long lists of names for the index and once the rest of the book is completely done, we’ll create two indexes (one for general use and once for geographic locations in trollworld.)

So that’s where we are at the moment. We are very close and are all pushing to get this done as soon as we can! Thank you again for your understanding and patience as we try to get back to the Shire.

6 thoughts on “Deluxe T&T “Marches” on towards completion”