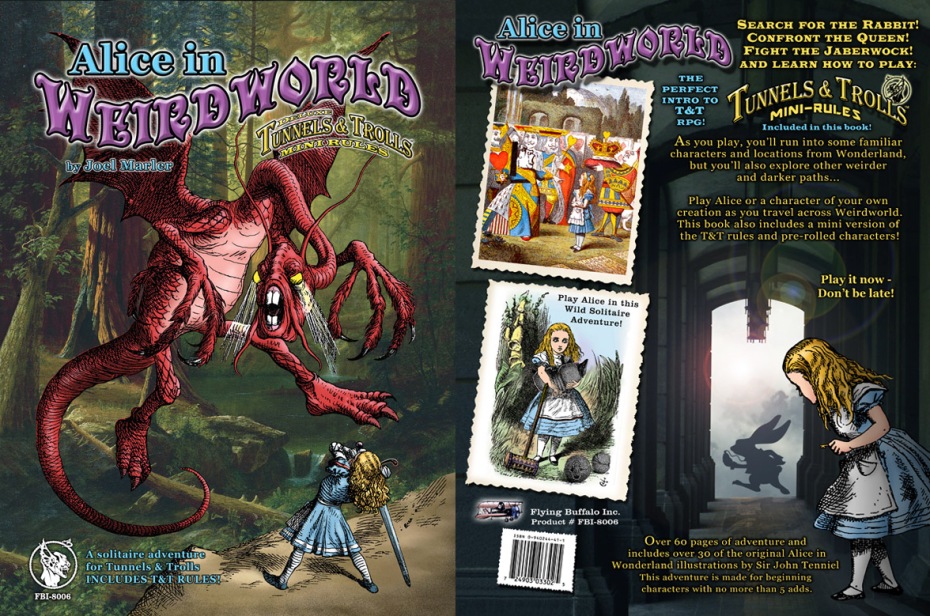 This all-new Tunnels & Trolls solitaire adventure is based on Alice’s Adventures in Wonderland and is the first T&T solo we’ve published ever based on an existing written work.  Play Alice or a character of your own design as you chase the rabbit into a weird world that resembles Wonderland, but is strangely different in many ways. Can you get to the Queen and escape Weirdworld, or will get trapped there forever? The book also uses over 30 of the orgianl Sir John Tenniel illustration from the two Lewis Carrol Alice books.  There are also additional illos in the solo that match the style of Tenniel’s art.

This new book also includes the 10 page Tunnels & Trolls Mini Rules, which allows you to play this solo adventure without the regular T&T Rulebook and 3 pre-rolled characters you can use in the adventure. This book is the perfect introduction for new players. 64 pages and this is being solicited to stores and distributors. We should have some advance copies at Origins and GenCon too.

Monsters! Monsters! and the Toughest Dungeon in the World return anew via Kickstarter

In 1976 Ken St Andre, the creator of the 2nd oldest role-playing game, Tunnels & Trolls created a companion game to T&T, called Monsters Monsters! It was first published by Metagaming Concepts and then again by Flying Buffalo in 1979. The game remained unchanged from then until now.  In 1980 Judges Guild published The Toughest Dungeon in the World a solitaire adventure that was meant to be played with Monsters! Monsters! or Tunnels & Trolls. Since then several new editions of T&T have come out and Ken St Andre was inducted into the Origins Hall of Fame. Ken is one of the last standing creators of the first generation of role-playing game designers and is still working on the classic games he created.

Now it’s 2020 – Ken St. Andre has updated and created a new edition of Monsters! Monsters! and Toughest Dungeon in the World.  What’s new in these books?  Ken has updated and enhanced his classic solo adventure and the Monsters! Monsters! Rules.  The new M! M! rules lists 38 monster kindreds you can play, gives you their dice modifiers and now each monster has a special power unique to its kindred. Each monster is described in a separate section. Its also better organized and easier to use. (For example – now the monsters are separated into humanoid and non-humanoid types)  There are two character sheets you can use along with specialized charts that allow you to roll up  various types of Monsters based on many common frpg environments.

This new edition of the Toughest Dungeon solo is at least 44 pages long and will keep any player busy for a lot of adventure in caverns and tunnels deep below Trollworld. The Lord of Shadows dwells in the depths – can you avoid his power or will you be corrupted by it?  One other thing we should add is that you can play this solo with the Tunnels &Trolls rules or the Monsters! Monsters! rules, so you don’t have to learn an whole new rpg to play it.

Steve Crompton, who has worked as Flying Buffalo’s Art Director since the 1990’shave enhanced it with new illustrations and graphics more suitable for  a monster-mash solo adventure. Most of the illustrations in the book are by Phil Longmierer, a long-time fantasy artist who specializes in drawing monsters that perfectly fit the tone and style of Ken’s creative writings. This new edition is at least 44 pages long and will keep any player busy for a lot of adventure in caverns and tunnels deep below Trollworld. The Lord of Shadows dwells in the depths – can you avoid his power or will you be corrupted by it?  One other thing we should add is that you can play this solo with the Tunnels &Trolls rules or the Monsters! Monsters! rules, so you don’t have to learn an whole new rpg to play it.

Few RPGs still have the opportunity for its original designer to work on a new versions of their classic works over 40 years later.  Don’t miss out on being a part of a piece of gaming history – the return of Monsters! Monsters! and a chance to explore “The Toughest Dungeon in the World!” (No matter what edition you get!)

Here’s link to the Monsters! Monsters! Kickstarter – it’s live now, so get in now and see the various formats that the M!M! Rules and Toughest solo are being offered. Although this isn’t an official Flying Buffalo Kickstarter, Ken ans Steve are a big part of  Flying Buffalo and Flying Buffalo will be carrying and selling these two books once the Kickstarter is over. Part of the reason for this Kickstarter being separate from Buffalo is that there is that Rick Loomis’ estate is in probate since his passing in August and it was decided that it would be more secure keeping this separate.  But we can tell you that there will be more Kickstarters from Buffalo to help celebrate its 50th Anniversary!